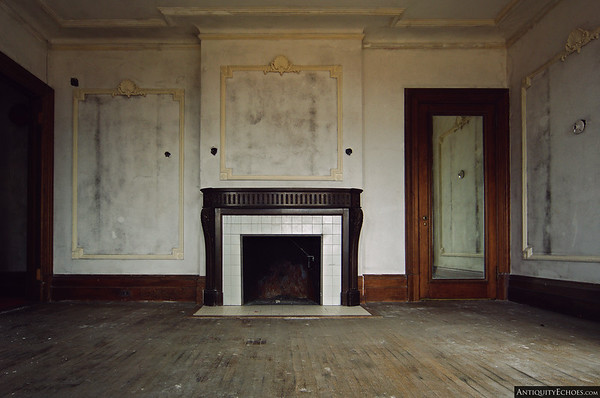 Please be sure to head over to Antiquity Echoes and check our their update on The Cenacle:

The Cenacle was most widely known as the religious retreat located in beautiful Mount Kisco, New York. However, the history of The Cenacle began as something a bit different. Many know Billy Rose as the famous New York showman and lyricist. Many do not know that the Cenacle was his primary New York residence from 1928 until his unfortunate death in 1966. The property was initially constructed as a manor in 1904, spanning across 98 acres of land. Billy Rose was the most notable owner and primary resident of the property.

The core center of The Cenacle property was the original primary manor. Although many features of Rose's home were destroyed in a devastating fire that occurred in 1956. Among the many detailed features that suffered damage, Rose's personal art collection was destroyed. After the death of Billy Rose in 1966, the estate changed hands many times and saw many additions to the original layout. The property's simple name "The Cenacle" was a biblical term that was given by the Covent of Our Lady of Retreat. This Covent initially operated The Cenacle as a retreat for women, advertised as "a place for women to seek a few hours or days away from the wordiness around them". The property saw an addition of a chapel, reception halls, ballroom, and a large seminary wing that housed over 100 bedrooms. All these additions were built off the main structure.

The property switched ownership between  several religious groups and convents over the years. Before its final days of occupancy, The Cenacle has an interesting story to tell in the world of Rock n' Roll. In 1977, it was decided that the rock legends Aerosmith would rent the property to write and record their fifth studio album "Draw the Line". Their music was fueled by drugs and their intention was that The Cenacle property would be isolated enough to resist the temptation of drugs. This did not last and the band almost instantly arranged for dealers to bring drugs to the property. Steven Tyler's exact quote from his autobiography was "hiding us away in a three-hundred room former convent was a prescription for total lunacy". The lyrics for the song "Critical Mass" was cited to come from a distinct dream that was had by producer Jack Douglas while he was staying with the band at The Cenacle. It was described that the typical recording session at The Cenacle was done in the chapel, drums set up on the alter.

By 2011 the property was up for sale. It sat abandoned for many years and began to slowly deteriorate inside. But it should be noted that for a building that has been abandoned since 2011, The Cenacle was in great shape by the time of its demolition in 2019. The demolition seemed to have come at random and done almost overnight. Years of history and famous owners/occupants destroyed at the snap of a finger. It is said that the structure was demolished so a brand new residence can be built in its place, thus adding to the disappearing history that was in the era of The Cenacle.

The adventure story of The Cenacle is a complex one to say the last. I had planned to go with Antiquity Echoes and Vacant NJ, the usual group for most places. The time comes for our planned trip and it's basically a monsoon across the Northeast. Heavy rain, winds, and all around no good weather. Antiquity Echoes needed to reschedule due to this, inclement weather isn't conclusive for the type of filming they like to do. Not to mention we didn't want any gear to be soaked during our hike in. Vacant NJ could not reschedule so I decided I'll split the difference and go twice. So Vacant and I packed up and went out on the day we had planned.

After an expected drenching walk in, we arrive at the door we knew was open. We open the door and the first thing we notice is fresh wet footprints coming in the same door. Being cautious and quiet as we usually are, we sneak around carefully and listen to voices we hear in the distance. After hearing some conversation we conclude they are explorers and go to let them know we are also here. We turn the corner to some familiar faces. It turns out to be our friends Abandoned NY and Eyes Of A MaDMaN Photography, completely unplanned and unexpected! After talking for a while they warn us there's another group in the building, making a total of 8 people inside at once. This is something I personally am never comfortable with so we go to find them to see what they are like. We enter a chapel and there they are. The reason this place was getting so much attention, they were the new wave of Instagram explorers!

Immediately they begin gloating to us, "yeah man I've been exploring for six months but only started hitting bangers like this recently". After hearing the word "banger", I had enough. They asked how long we have been exploring, expecting that they would be winning the "competition" of exploring longer. Once they heard our answer of 10+ years, they stopped talking with us. So we head upstairs to begin photographing this beautiful building. After a bit Abandoned NY and  Eyes Of A MaDMaN Photography take off and we eventually make it down to the chapel. The Instagram explorer group is still there. Over an hour later they never left the chapel. Eventually they leave, photographing only the chapel and not venturing anywhere else in the building. Their explanation was that the chapel would get the most likes and that's all that concerned them. Finally they left for good and it was quiet. We finished up photographing the building, grabbed some exterior photos, and went on our way.

The following week it comes time to revisit with Antiquity Echoes. After all that, as fate had it, I could not make it to return. They went and had their visit and we all agreed to return together to get some final photographs. Before that could happen, this place was seemingly demolished overnight and we never got to visit this place together.